The Secret
We were driven back underground by the local economy. Or was it local politics? Organizers of noise shows have always had a hard time securing venue spaces, but recently in Richmond and Charlottesville, art galleries, particularly small non-profit or grassroots galleries have become reliable partners. Yet in this economy, such spaces are having a hard time paying the bills. In Richmond, they face an additional challenge from the city, as CAPS (an organization that fights “blight”) has cracked down on occupancy rules and threatened to issue fines. This is a hard spot for small galleries whose only hope at the moment is to find funds to buy a special permit from the city.

But you can’t keep good noise, and good noise organizing, down. Kenneth Yates moved the show to an old warehouse and changed it from a public event to a private one. With a plan to meet at a pub in Church Hill prior to the event, a small group of 10 artists and enthusiasts chatted over drinks about CAPS, the new performing arts center, and the possibility of forming an arts district business association. This intimate gathering set the stage for a noise show featuring Philip White, collaborating with Caustic Castle (Yates), Jonathan Zorn and Erik DeLuca, and my own project with Wendy Hsu, Grapefruit Experiment.

The Show
Dance punk and IDM blared out of a laptop as everyone set up amidst letter press equipment, cans of paint and a haystack of electrical wires. Wendy and I had planned to go on first, but her mixer started smoking. Frustrating, but not much of a surprise given the varying voltages we were plugging in and rearranging, Jon explained. Instead, Jon and Erik went on first with a continuous set that varied subtle white noise with penetrating bird sounds. Erik incorporated the crackle of broken cables as gestures that responded to the birds as Jon created a sparse yet dynamic landscape of shifting tones. At one moment the set appeared to come to a natural close, and as Jon forged ahead, drawing new lines on his wacom tablet, Erik entered again with a wall of sound that gave new direction to the set. While it was their first time performing together, the audience would never have known it.

In our set as Grapefruit Experiment, Wendy and I were working out a new set up. Our theme was futurism of the past and our ethos was “work.” I used a new instrument built by Softpieces (Zach Mason) which is a pill bottle with a contact mic on the bottom and paper clip “feet” designed to pick up the resonance of containers. It looks like a moon lander. Wendy had a broken accordion (mailed to her from Craig’s List in a broken box without any packing materials) and she wanted to play it as a shell of a deceased instrument.

The idea for the piece was that she would be working on mechanical technologies circa 1930s and that I would learn from her and begin my own work on analog technologies circa 1960s – moving from the industrial to the space age with little awareness of how our work would affect the future, believing we were the future. We were very surprised by how it turned out:

This is the second half of the set.

The headliner Philip White and Caustic Castle brought the show to a climactic close in a sometimes harsh, sometimes rhythmic conversation. Caustic Castle used his self-designed no-input mixer to deftly craft a range of tones and timbres as White combined a laptop, unmarked boxes of switches and a huge mixer to shape the flow of events. 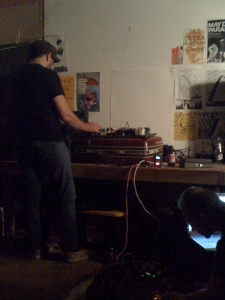